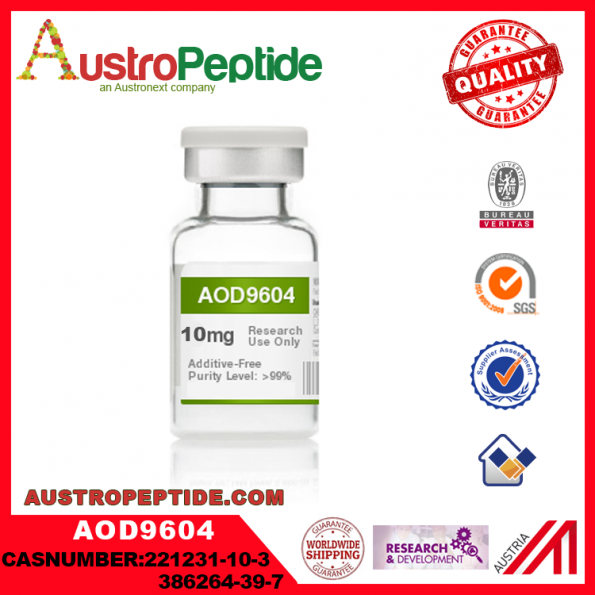 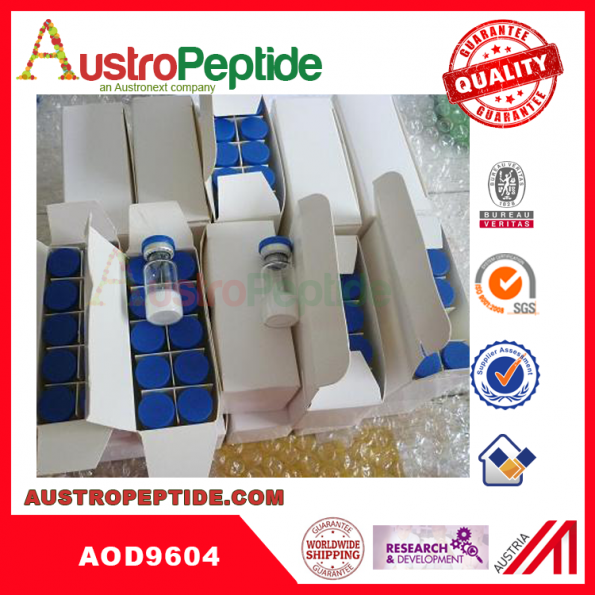 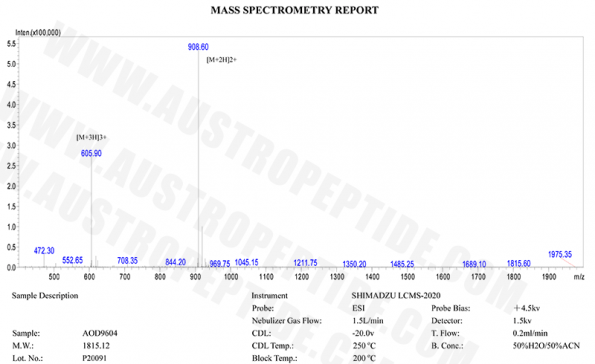 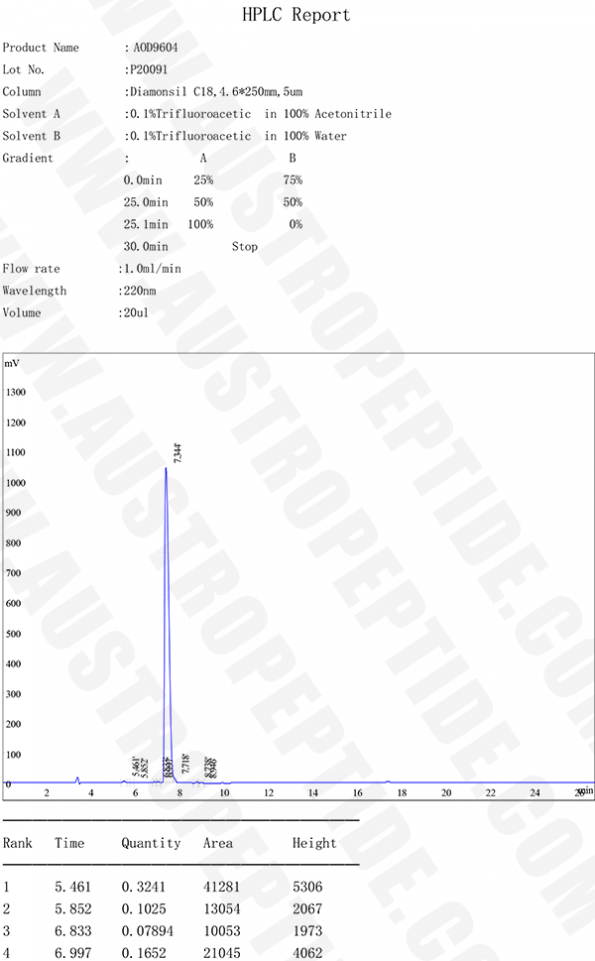 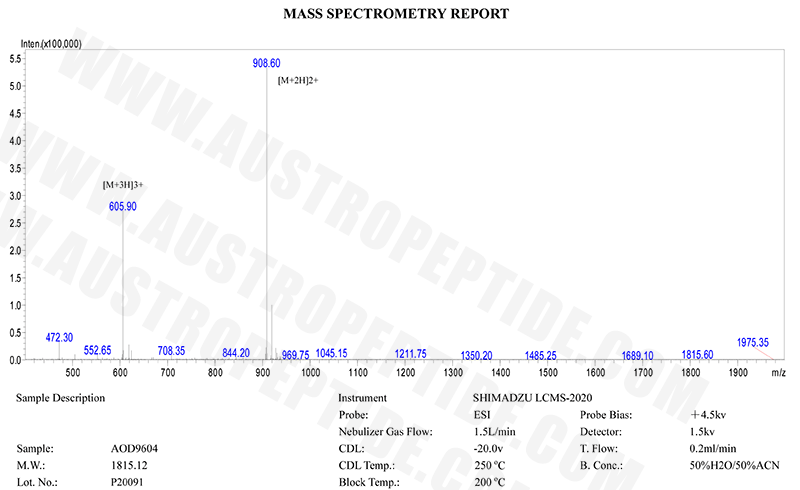 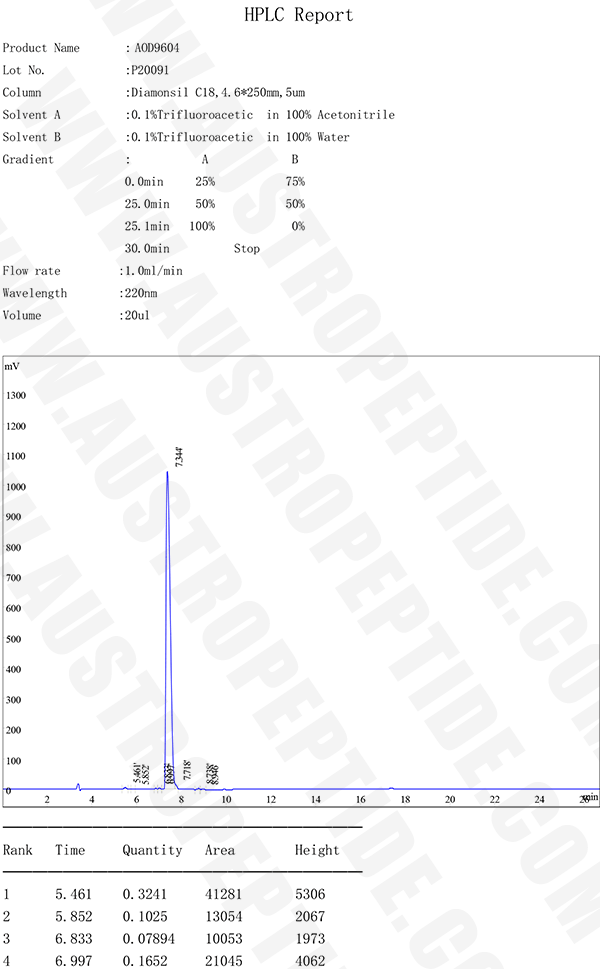 AOD9604 is a peptide fragment (HGH Fragment 177-191) of the C-terminus of Human Growth Hormone to which a tyrosine is added at the N-terminal end.  Studies have suggested that AOD9604 is more effective than its predecessor AOD9401 in its ability to stimulate lipolytic (fat burning) and anti-lipogenic activity. Like Growth Hormone, AOD9604 stimulates lipolysis (the breakdown or destruction of fat) and inhibits lipogenesis (prevents the transformation of  fatty food materials into body fat) both in laboratory testing and in animals and humans.  Recent  clinical research studies have shown that  AOD9604 did show a reduction of body fat in the mid abdominal area in both obese, over-weight, and average built people.

The Development of AOD9604 from Human Growth Hormone

Investigators at Monash University discovered that the fat-reducing effects of GH appear to be controlled by a small region near one end of the GH molecule. This region, which consists of amino acids 177-191, is less than 10% of the total size of the GH molecule and appears to have no effect on growth or insulin resistance. It works by mimicking the way natural Growth Hormone regulates fat metabolism but without the adverse effects on blood sugar or growth that is seen with unmodified Growth Hormone.

The Fat Loss Properties of AOD 9604

In laboratory tests on fat cells from rodents, pigs, dogs, and humans, the HGH fragment released fat specifically from obese fat cells but not from lean ones, reduced new fat accumulation in all fat cells, enhanced the burning of fat. In rodents (rats and mice), HGH fragment reduced body fat in obese animals but, enhanced fat burning without changing food consumption or inducing growth (as it does not increase IGF levels) or any other unwanted Growth Hormone effect. Recent research has shown AOD9604 to be an extremely potent and effective fat burner. Metabolic is developing AOD-9604 for the potential treatment of obesity. Research studies have shown that AOD9604 actually acts on the reduction of excessive adipose tissues such as those in the abdominal area, increase in muscle mass, and enhances the lipid content of the body.

These segments of the synthetic peptide AOD9604 have been researched for their in vivo effects in laboratory mice musculus. Results have shown that AOD9604 have resulted to a short-period increase in blood glucose and a more sustained increase in plasma insulin, together with other fragments such as 172-191, 177-191 and 178-191. In addition, the researchers have suggested that functionality of the peptide depends not only in the informational sequence but should also have the correct physical configuration (Ng and Borstein 1978). Also, AOD9604, being a region of high accessibility to proteases and also rich in proline, have been demonstrated to affect the conformational change in the cytoplasmic domain of the band 3 of erythrocyte membrane protein by serving as the hinge for the pivoting of the two subdomains. This then suggest that such residue is significant in conformational changes be serving as sites for peripheral protein binding in some body cells (Low et al. 1984).